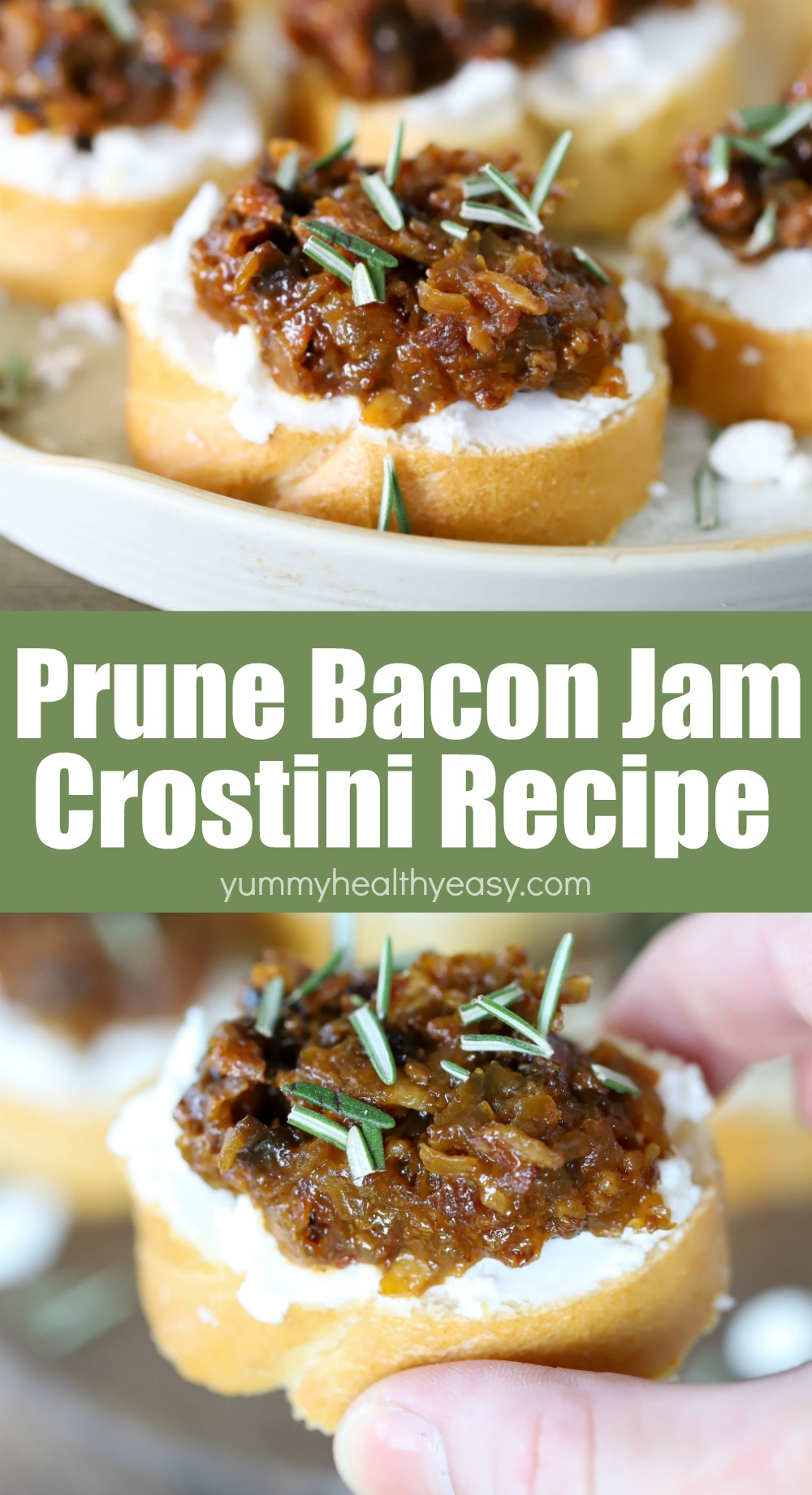 This California Prune Bacon Jam Crostini Recipe is absolutely scrumptious! It might sound a little different from a normal crostini – but the flavors of prunes, bacon & goat cheese on a toasted baguette are absolutely INCREDIBLE together. You will love it!

(Thank you to the California Prune Board for sponsoring this post!)

When you hit the jackpot with a dish that delivers all the flavors, you celebrate. This Prune Bacon Jam Crostini is one of those celebrations! I was trying to think of some yummy finger foods that I could make and incorporate California Prunes (because I LOVE prunes! They are my favorite snack!)

But I really didn’t have any sort of crostini on my website. I mean, I have dips like this Skinny Avocado Dip or my Mom’s Seven Layer Bean Dip but nothing compares to this Prune Bacon Jam Crostini Appetizer! 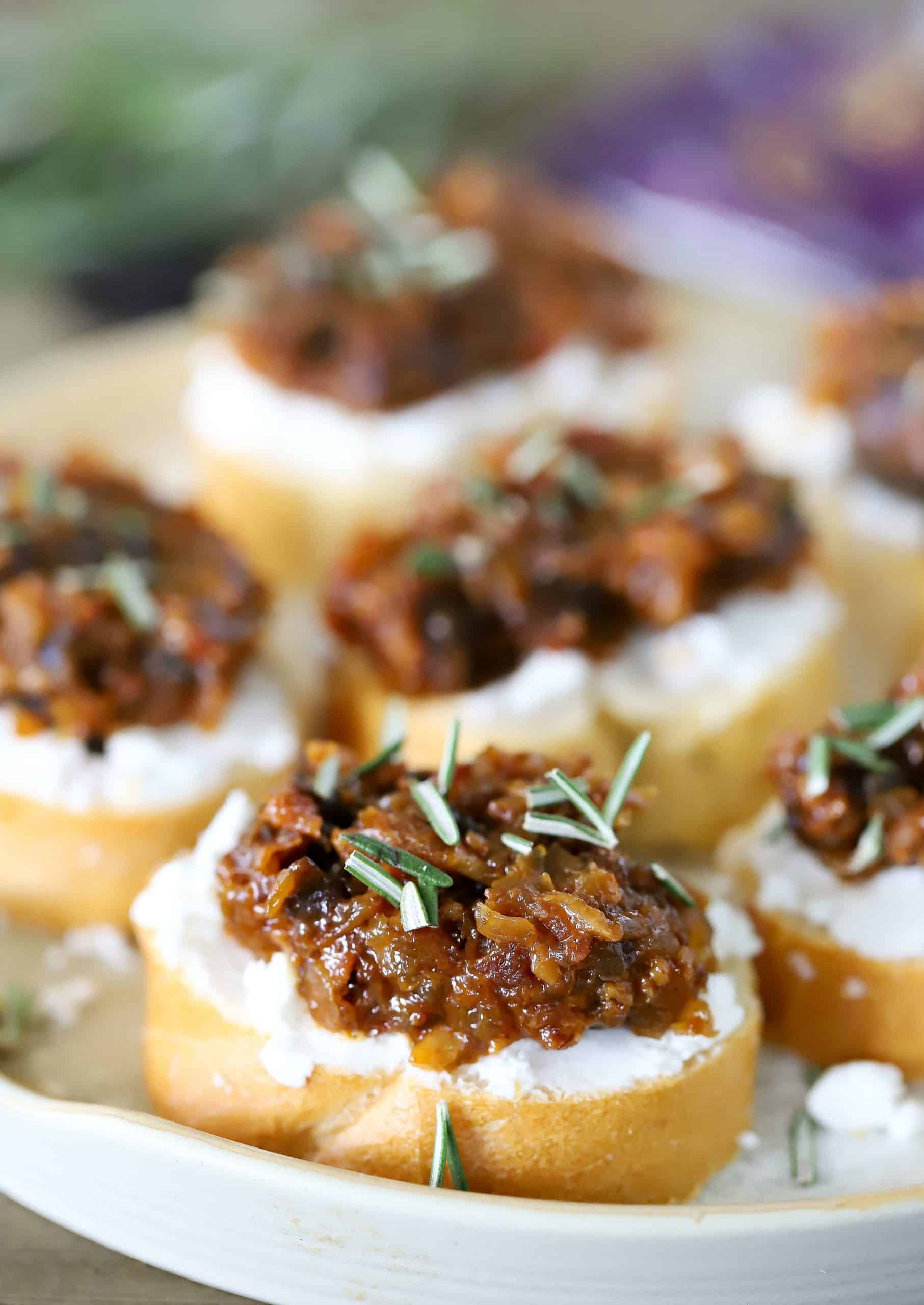 What do you eat with bacon jam?

Bacon jam is great with so many things! It pairs amazingly with most cheeses and would go great with eggs as well! I love that when I add California Prunes to the Bacon Jam, it adds a sort of sweetness that cuts the salty aspect of a regular bacon jam.

Putting the prune bacon jam on a crostini with tart goat cheese just sealed the deal! 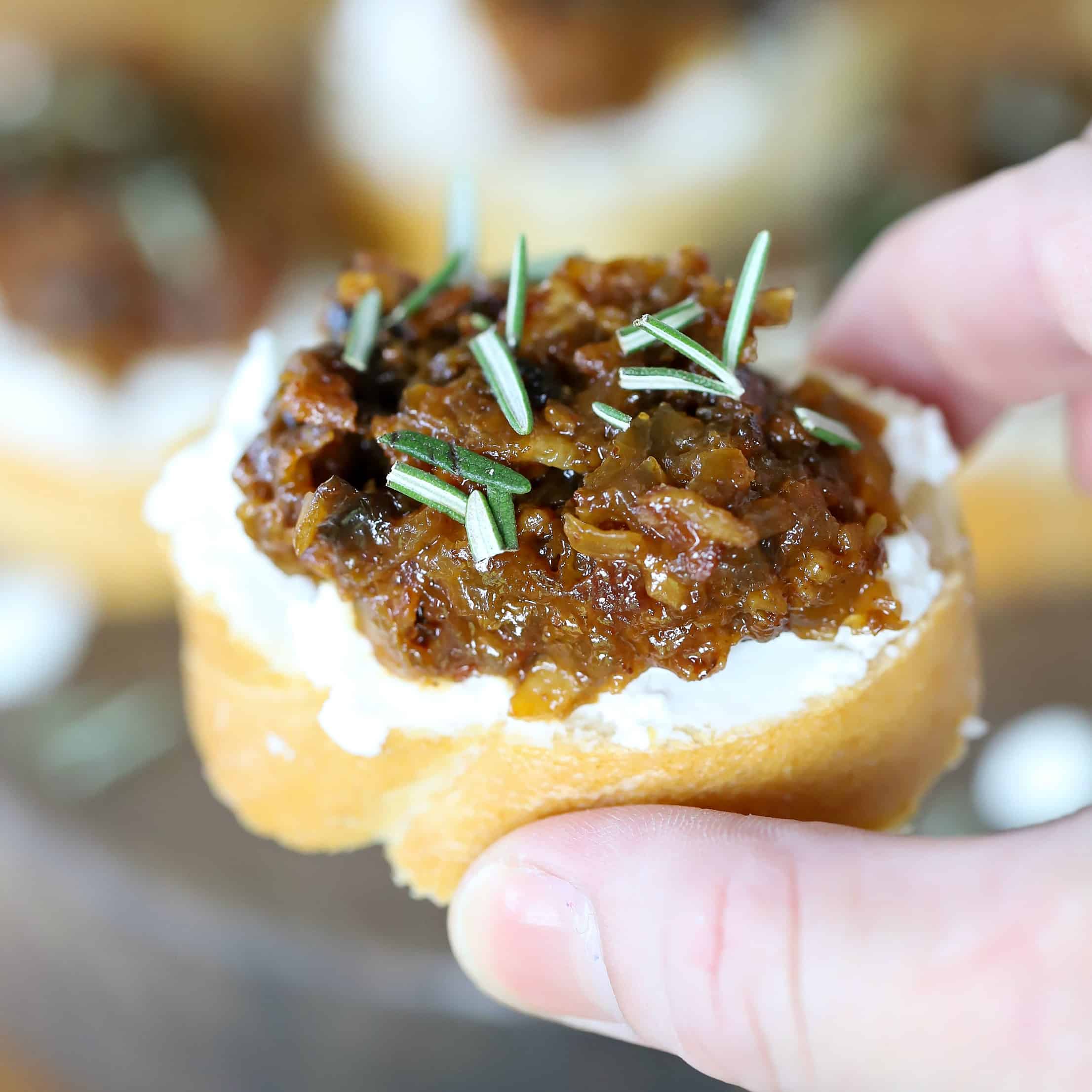 How long does bacon jam last in the fridge?

The great thing about this California Prune bacon jam is that it does last several days when refrigerated. This makes it super easy to make ahead of time if you’re serving guests or bringing to a small gathering.

You will seriously look like a super chef if you show up for a get-together with a plateful of this beautiful and flavorful crostini recipe! 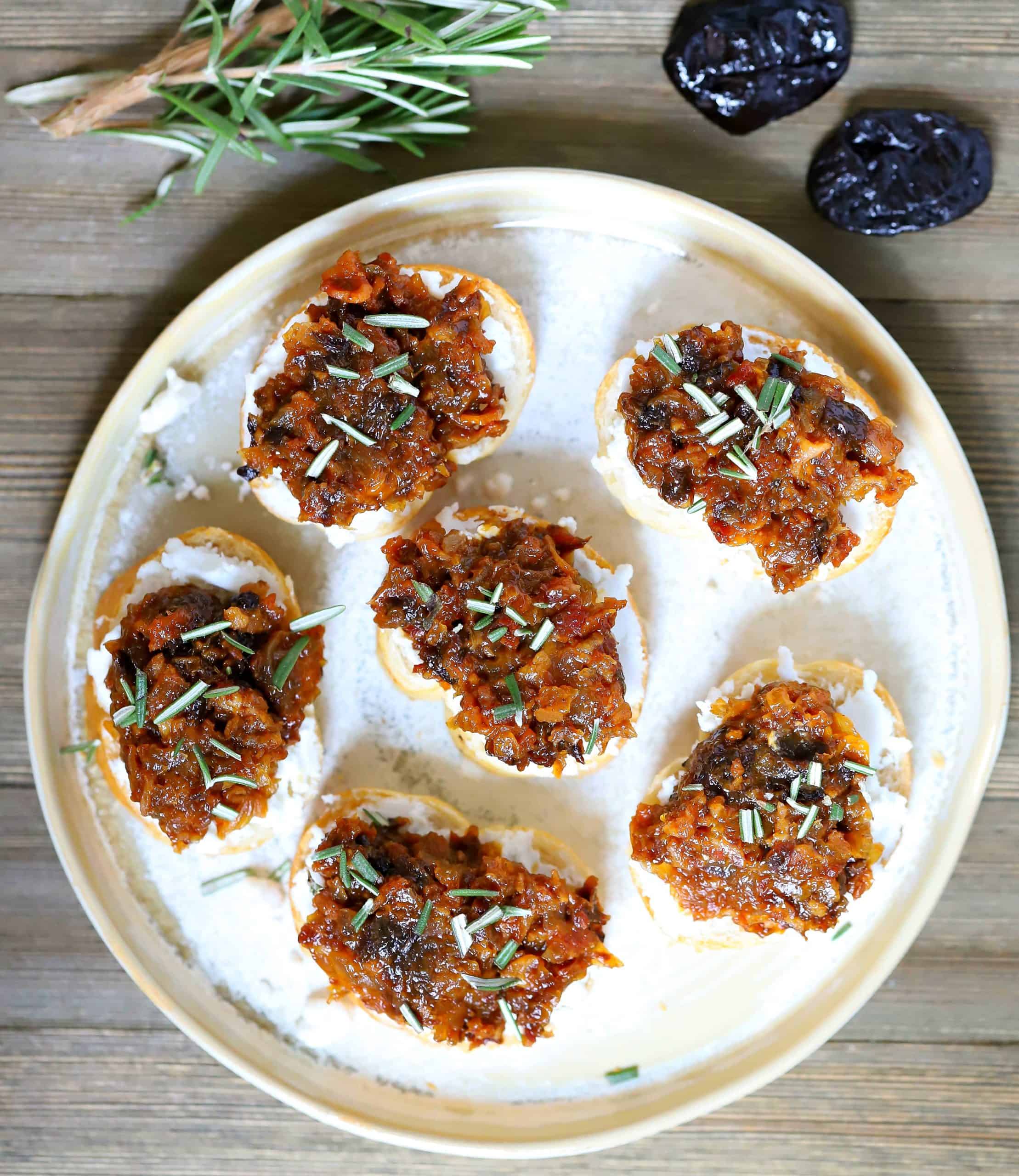 Petit d’Agen prune plums have features that make them ideal for prunes. They have a slightly thicker skin, and this allows them to dry slowly and evenly but still permits enough moisture content.

The drying time helps concentrate and caramelize the sugars in the plum. The result is a prune that possesses a wonderfully concentrated flavor. It is a bit floral and fruity and just a trace of earthiness. So delicious!

The typical plum you get at the farmer’s market is quite different than the Improved French plum used to create California Prunes. The Petit d’Agen plum came to California from France during the Gold Rush.

Be sure to check out California Prunes online at www.CaliforniaPrunes.org and on social media @CAprunes to learn more and get more amazing prune recipes! 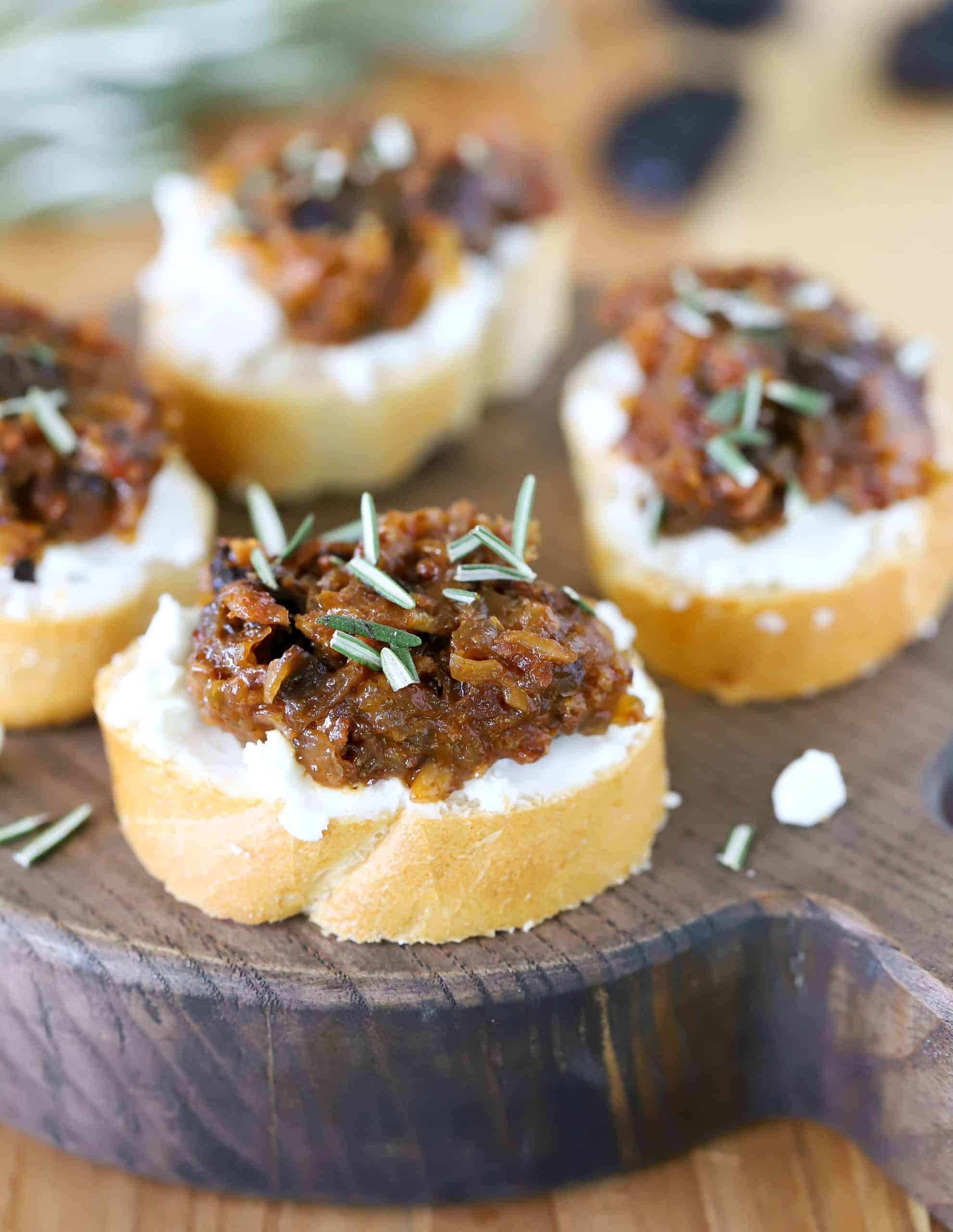 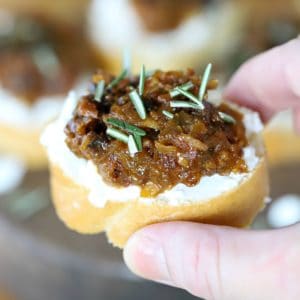 This California Prune Bacon Jam Crostini Recipe might sound a little different from a normal crostini - but the flavors are absolutely INCREDIBLE together! I can't stop making it and eating it!
No ratings yet
Print Pin Rate
Course: Appetizer
Cuisine: American
Author: Jenn