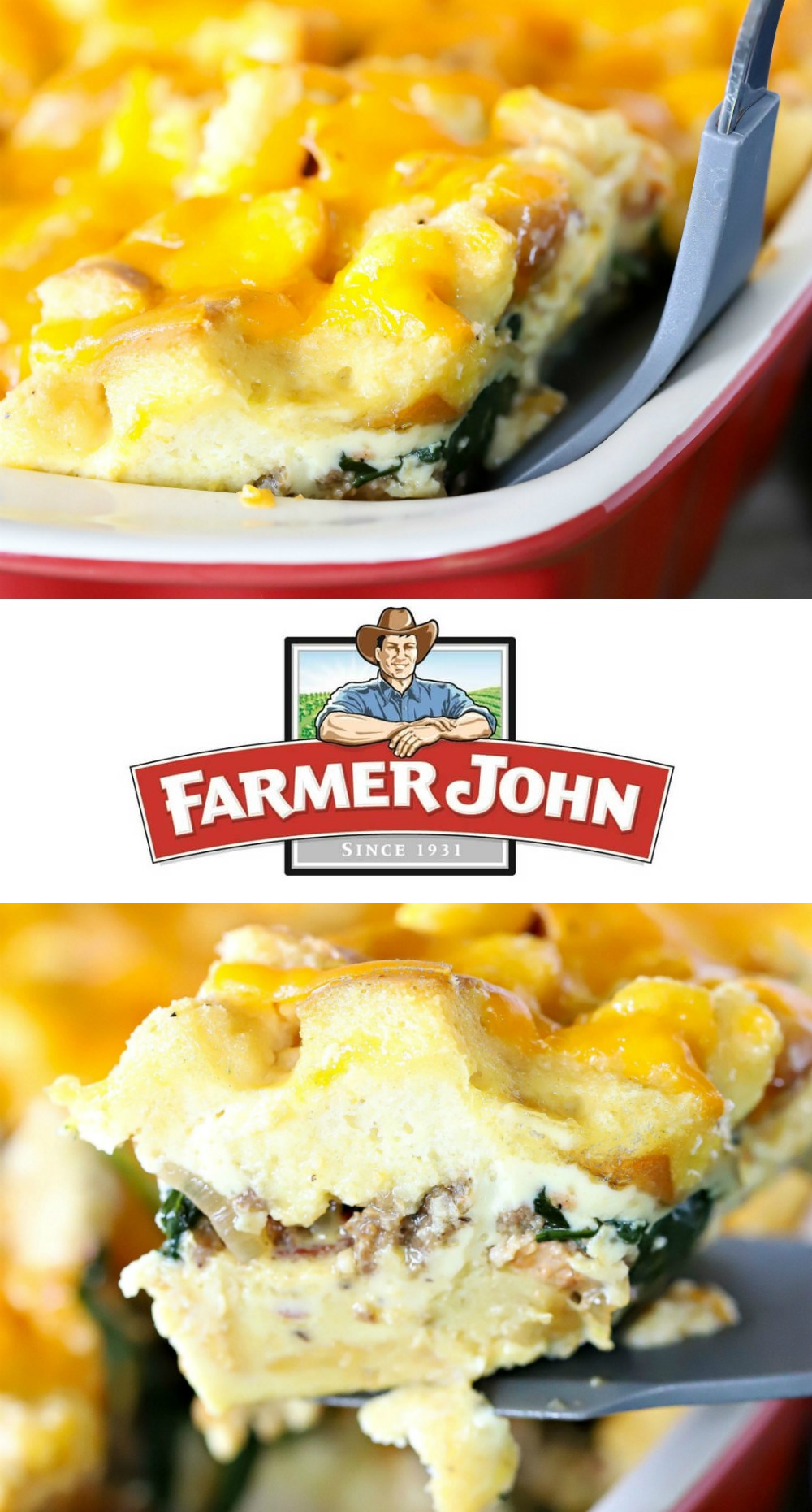 This egg strata recipe has a delicious egg & bread layer on the bottom and a layer of bacon, sausage, spinach & onion filling in the middle with another layer of bread and cheese on the top. This gorgeous casserole will impress your guests – whether it’s for brunch, lunch or breakfast for dinner!

(Thank you to Farmer John’s for sponsoring this blog post!) 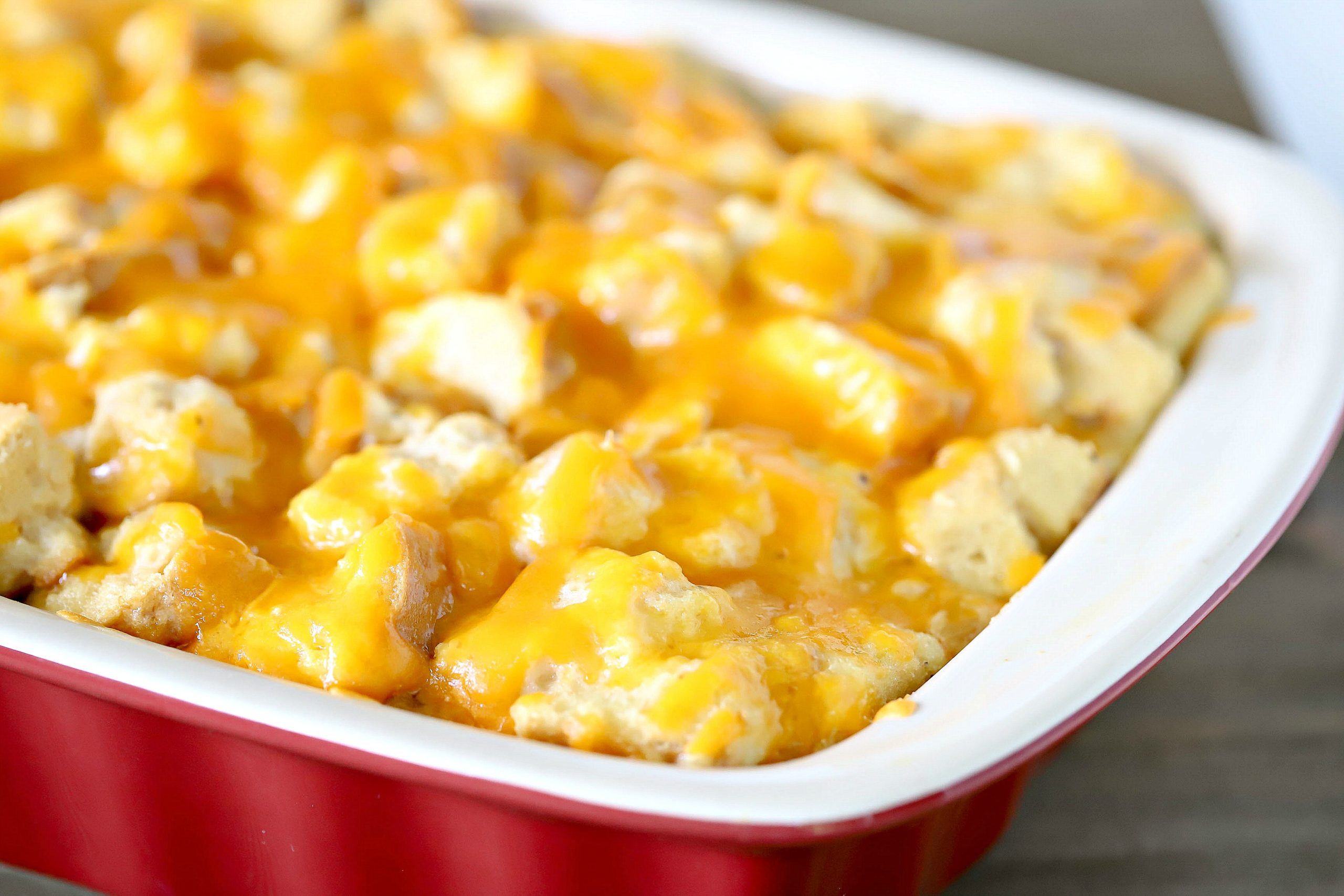 This egg strata recipe is so easy to make! It’s a diced up loaf of French bread soaked in an egg mixture with a layer of Farmer John’s bacon & sausage plus wilted spinach & caramelized onion filling in the middle with another layer of bread and cheese on the top. It looks fancy but is super easy to make!

If you’re in the mood for other easy breakfast recipes, try these Mini Egg Cups,  Freezer Breakfast Burritos or this Egg & Sausage Breakfast Casserole! 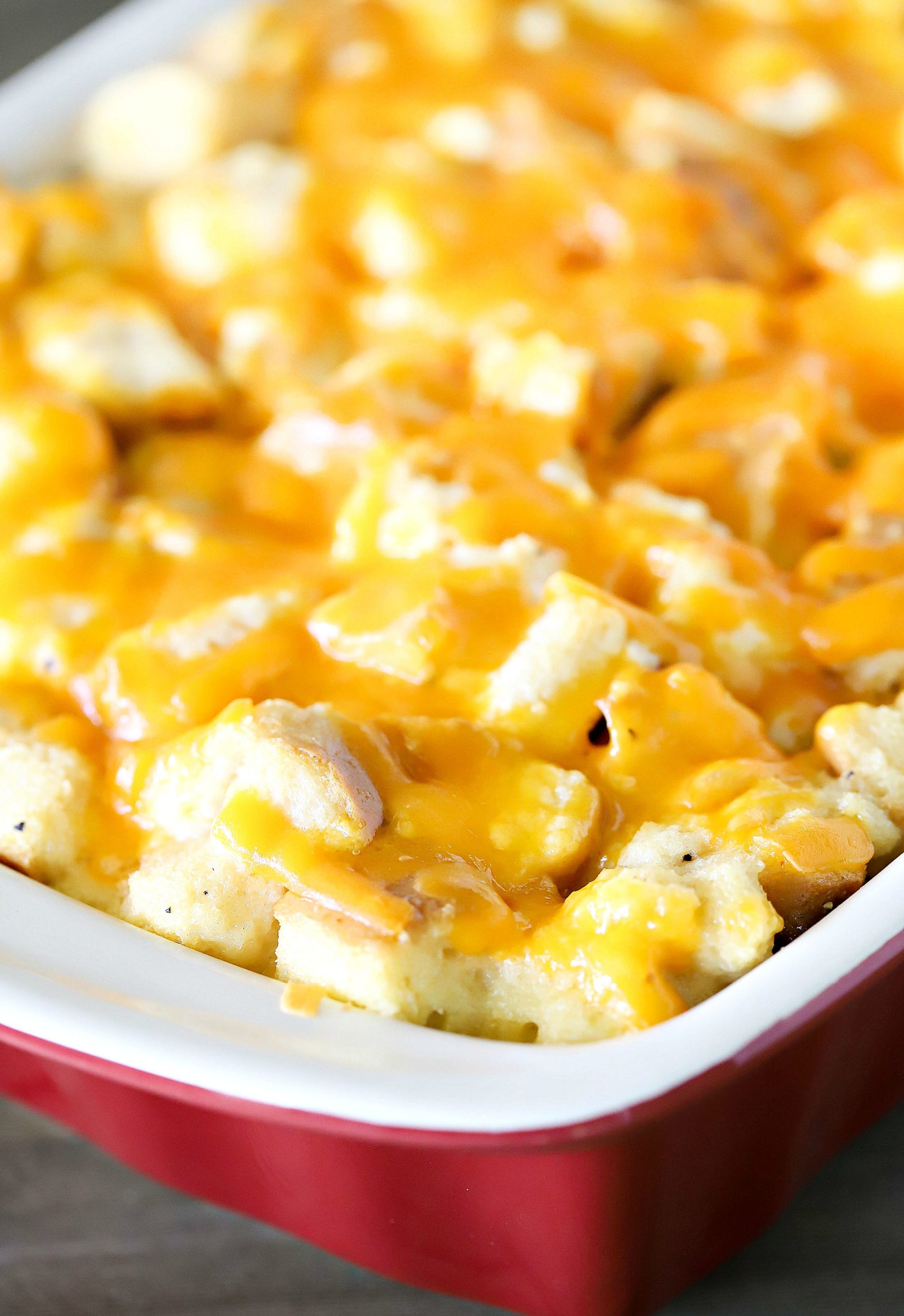 What is the difference between a frittata and a strata?

What is the difference you may ask? A frittata (like this Easy Roasted Mushroom & Potato Cheese Frittata) is a simple egg dishes to make. It’s merely an unfolded Italian omelet with all the filling ingredients cooked on top.

On the other hand, an egg strata involves layers of milk, egg, cheese and bread baked into a puffy casserole. It may also include meat or vegetables. The usual preparation requires the bread to be layered with the filling in order to produce layers. Both are equally easy and so delicious!! 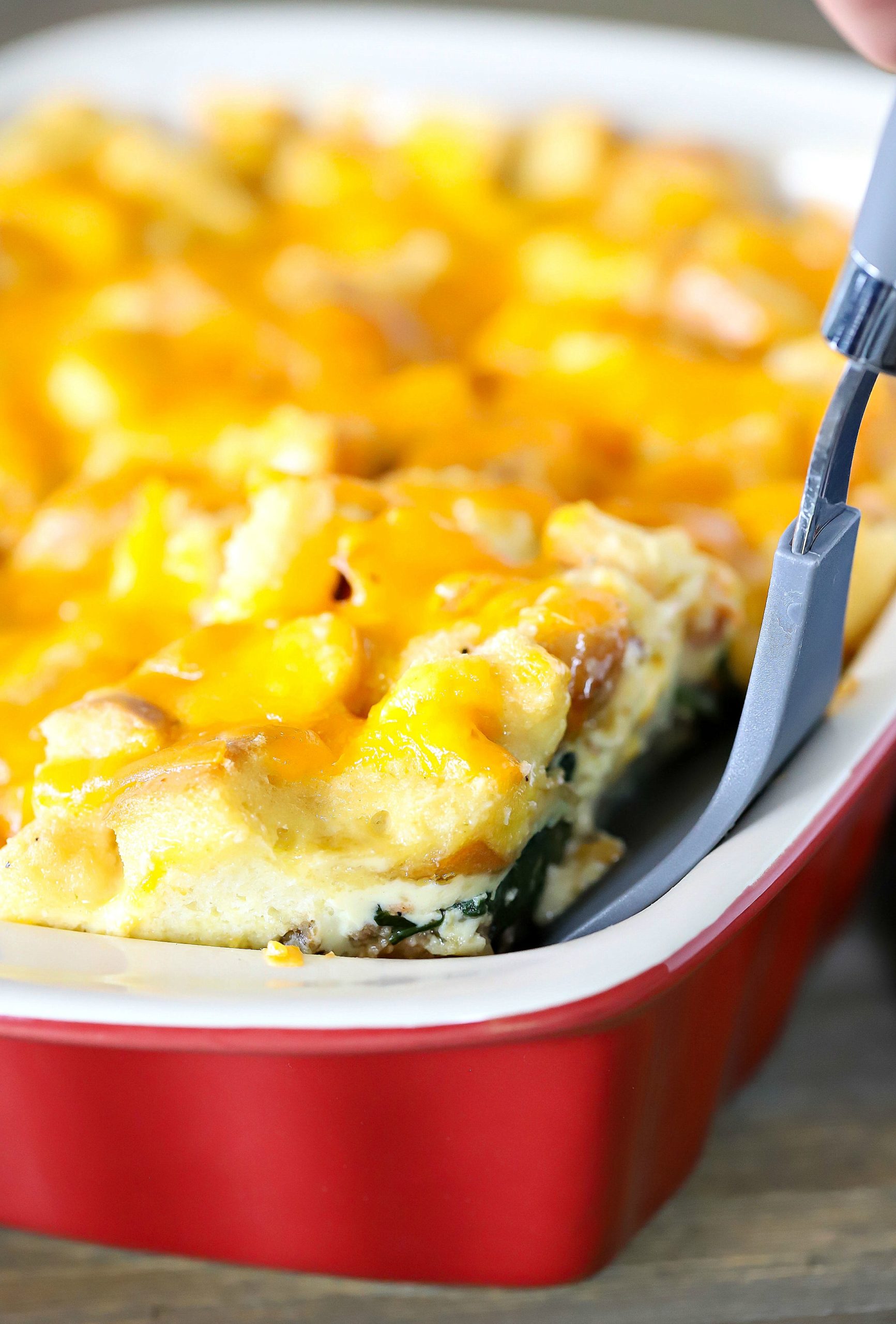 How long does a strata need to soak?

Honestly, an egg strata can soak for hours (overnight) or for just 30 minutes! I think the key is to use a loaf of bread that’s been somewhat dried out so the egg and milk mixture really soak into it and it doesn’t get too soggy. The layers of the strata really make the dish flavorful and tender. 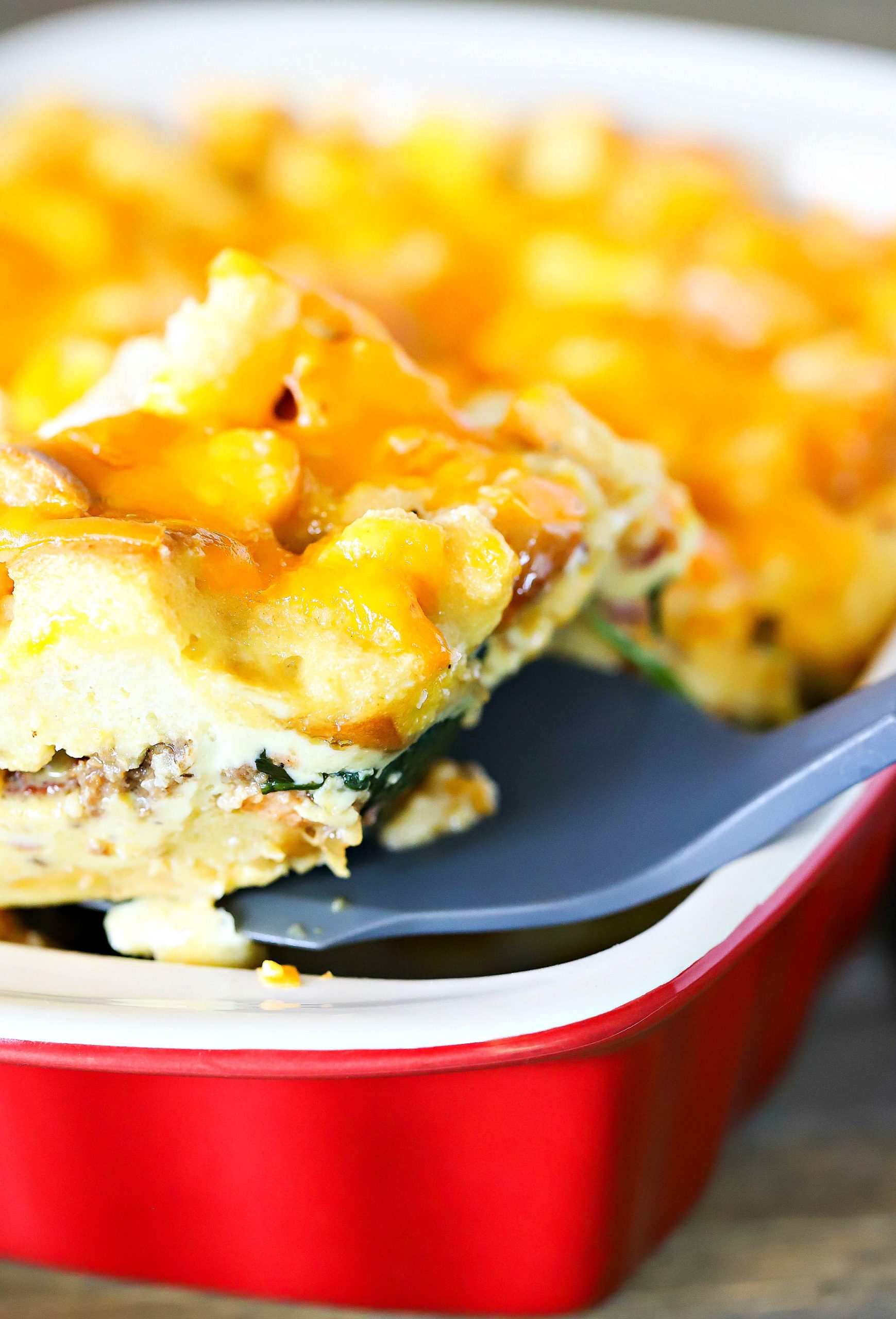 What does strata mean in cooking?

Egg Strata is basically a savory bread pudding. It’s generally made with slices of crusty bread and toppings of cheese plus vegetables and meat in the middle. It’s then soaked and baked until set and puffy. I’ve always loved it, but only just out of the oven when really hot and fluffy. As it cools, it settles and becomes more dense, but still very tasty.

I encouraging YOU to post images of your own summer grilling recipes with the hashtags #FarmerJohnsFlavor or #BringtheFlavor ! 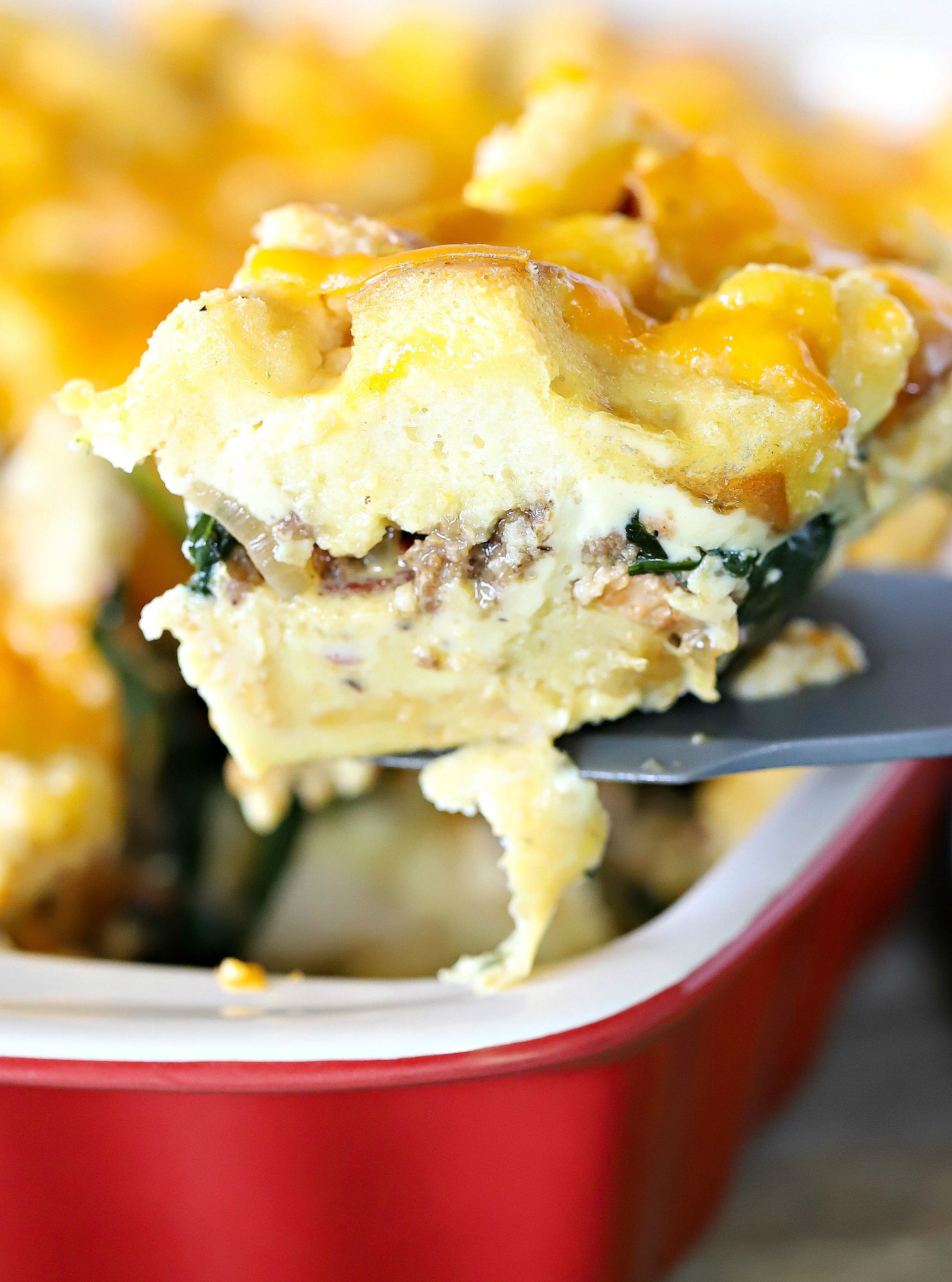 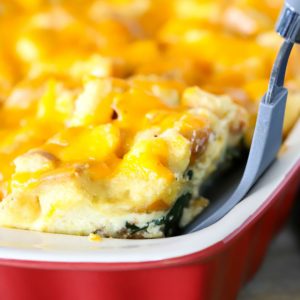 This Egg Strata recipe has a delicious egg & bread layer on the bottom and a layer of bacon, sausage, spinach & onion filling in the middle with another layer of bread and cheese on the top. It's absolutely delicious!
No ratings yet
Print Pin Rate
Course: Breakfast
Cuisine: American
Servings: 6 people
Author: Jenn

Pin the image below and be sure to tag me on social media if you make this recipe!

(Thank you to Farmer John’s for sponsoring this blog post!)